CINDER : Block storage as a service

What is meant by a block storage?

In block level storage each block acts as an individual hard drive and is configured by the storage administrator. These blocks are controlled by the server-based operating system, and are generally accessed by Fibre Channel (FC), Fibre Channel over Ethernet (FCoE) or iSCSI protocols.

Since the volumes are treated as individual hard disks, block storage works well for storing a variety of applications such as file systems and databases. They also tend to be more flexible and provide better performance. But it tend to be more complex and expensive than file storage,

Types of Storage in OpenStack, and example use cases

Cloud instances are typically created with at least one ephemeral disk which is used to run the VM guest operating system and boot partition, an ephemeral disk is purged and deleted when an instance is terminated.  Swift was included as one of original OpenStack projects to provide durable, scale-out object storage.  Initially, block services was created as a component of Nova Compute, called Nova Volumes; that has since been broken out as its own project called Cinder.

Cinder provides instances with block storage volumes that persist even when the instances they are attached to are terminated. A single block volume can only be attached to a single instance at any one time but provides the flexibility to be detached from one instance and attached to another instance. The best analogy to this is of a USB drive which can be attached to one machine and moved to a second machine with any data on that drive staying intact across multiple machines. An instance can attach multiple block volumes.So in brief cinder is a persistent block level storage device for use with OpenStack compute instances. It manages the creation, attachment and detachment of block devices to servers. and its provides unified storage support for numerous other storage platforms, including Ceph, NetApp, Nexenta, SolidFire and Zadara. And It provides snapshot management functionality for backing up data stored on block storage volumes that can be restored or used to create new block storage volumes

Features and Use cases

In a Cloud platform such as OpenStack, persistent block storage has several potential use cases:

Cinder-api is an WSGI application that accepts and validates REST (JSON or XML) requests from clients and routes them to other Cinder processes as appropriate over AMQP.

Cinder-scheduler determines which backend should serve as the destination for a volume creation or movement request. It maintains non-persistent state for backends (e.g. available capacity, capabilities, and supported extra specs) that can be leveraged when making placement decisions. The algorithm utilized by the scheduler can be changed through cinder configuration.

Cinder-volume accepts requests from other Cinder processes and serves as the operational container for Cinder drivers. This process is multi-threaded and typically has one thread of execution per Cinder backend as defined in the Cinder configuration file.

Cinder-backup handles the interaction with potential backup targets (e.g. OpenStack Object Storage Service (Swift)) when a client requests a volume backup to be created or managed.

Cinder comes into play in two scenarios one is while creating or deleting a volume and the other one is attaching a volume to an instance. Lets consider the first case. There are total 9 steps to fulfill that. 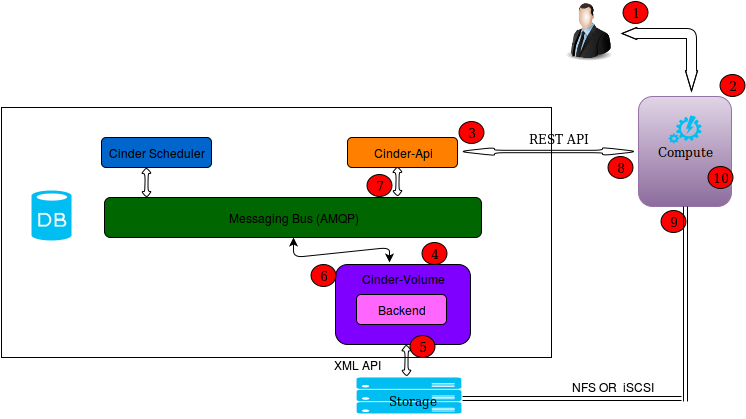