Direct attached storage (DAS) is digital storage that is attached directly to a computer or a server. In other words, DAS isn’t part of a storage network. The most familiar example of DAS is the internal hard drive in a laptop or desktop PC. In practice, the phrase direct attached storage is used most often in reference to dedicated storage arrays attached directly to servers. It is used to distinguish DAS from networked storage arrangements, like SAN or NAS devices. 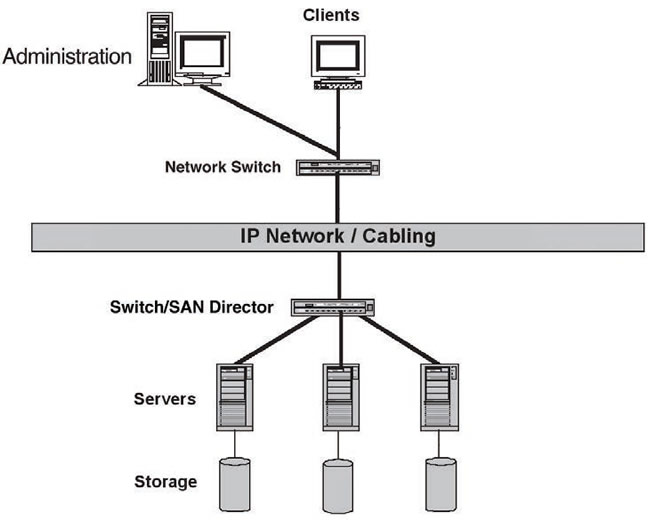 The primary benefits of DAS include simplicity and low cost. Installing networked storage systems, like NAS and SAN devices, requires more planning, as well as the purchase and deployment of network hardware, such as routers and switches, in addition to appropriate cabling and connections. By contrast, most PCs and many servers come with DAS already installed, and if you want to add more direct attached storage, generally all you need to purchase is a storage device and possibly a cable. Maintaining DAS is also very simple; by contrast, SAN and NAS solutions usually require management software and may require monitoring software as well. 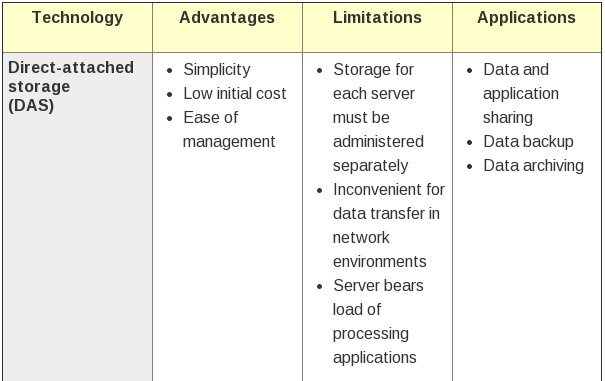 DAS devices can utilize traditional spinning hard disk drives or solid state media. Hard disk drives (HDDs) are less expensive than solid state drives (SDDs) on a per gigabyte basis. However, they aren’t as fast as SDDs. The majority of DAS devices sold today use hard disk drives, although SSDs and hybrid devices are becoming more popular, particularly for applications where performance is paramount, such as Big Data analytics.
Conversely, SSDs offer the fastest performance, but they are also the most expensive. However, in recent years, they have become more affordable. In addition, because SSDs don’t have a spinning disk, they last longer and offer better reliability than HDDs. Many vendors now offer SSDs as an option on mid- to high-end servers for part or all of the storage capacity.
DAS devices can connect to PCs and servers via a variety of protocols, including SCSI, SAS, SATA, ATA, eSATA and Fibre Channel.

SAN (storage area network) is a high-speed network of storage devices that also connects those storage devices with servers. It provides block-level storage that can be accessed by the applications running on any networked servers. SAN storage devices can include tape libraries and disk-based devices, like RAID hardware. A SAN moves storage resources off the common user network and reorganizes them into an independent, high-performance network. This allows each server to access shared storage as if it were a drive directly attached to the server. When a host wants to access a storage device on the SAN, it sends out a block-based access request for the storage device.

A storage-area network is typically assembled using three principle components: cabling, host bus adapters (HBAs) and switches. Each switch and storage system on the SAN must be interconnected and the physical interconnections must support bandwidth levels that can adequately handle peak data activities.

Storage-area networks are managed centrally, and Fibre Channel (FC) SANs have the reputation of being expensive, complex and difficult to manage. The emergence of iSCSI has reduced these challenges by encapsulating SCSI commands into IP packets for transmission over an Ethernet connection, rather than an FC connection. Instead of learning, building and managing two networks — an Ethernet local-area network (LAN) for user communication and an FC SAN for storage — an organization can now use its existing knowledge and infrastructure for both LANs and SANs.

A Network Attached Storage (NAS) device is a storage device connected to a network that allows storage and retrieval of data from a centralised location for authorised network users and heterogeneous clients. NAS devices are flexible and scale-out, meaning that as you need additional storage, you can add on to what you have.

A NAS is like having a private cloud in the office. It’s faster, less expensive and provides all the benefits of a public cloud onsite, giving you complete control. 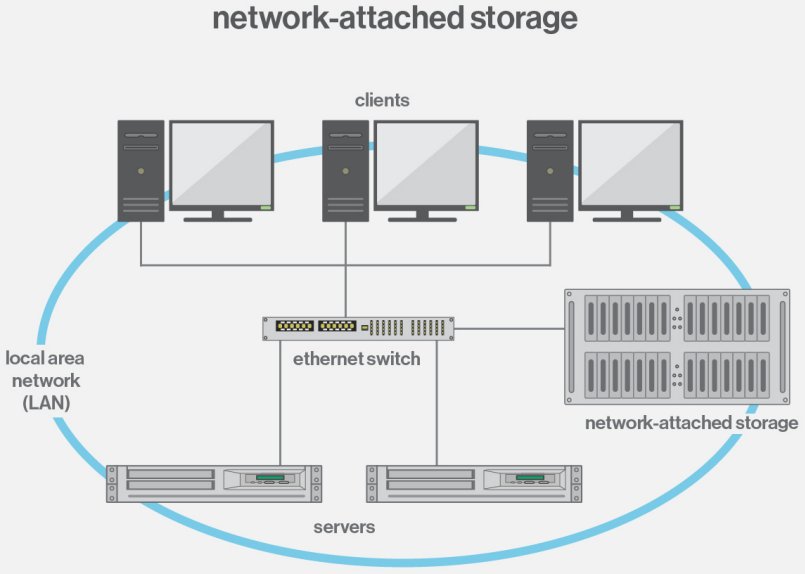 NAS allows more hard disk storage space to be added to a network that already utilizes servers without shutting them down for maintenance and upgrades. With a NAS device, storage is not an integral part of the server. Instead, in this storage-centric design, the server still handles all of the processing of data but a NAS device delivers the data to the user.
A NAS device does not need to be located within the server but can exist anywhere in a LAN and can be made up of multiple networked NAS devices.

NAS Protocol: NAS severs are fully supported by the network file system and common interface file system. NASs also support different kinds of network protocols including SCP and File Transfer Protocol (FTP). However, over TCP/IP, communication can be done more efficiently and reliably. The initial purpose of NAS design was only file sharing over UNIX across a LAN. NAS also strongly supports HTTP. So users/clients can easily download the stuff directly from the Web if NAS is connected to the Internet.
NAS Connections: Different mediums are used for establishing connections with NAS servers, including: Ethernet, fiber optics and wireless mediums with 802.11 standards.
NAS Drives: Any technology can be used for this purpose, but SCSI is used by default. ATA disks, optical discs and magnetic media are also supported by NAS. 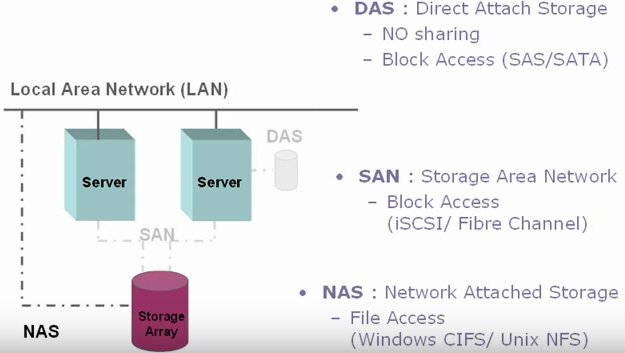 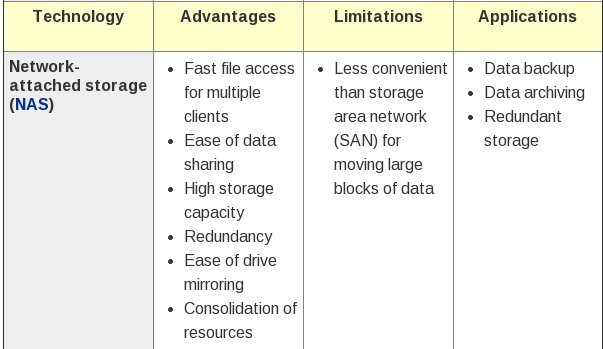 There are three areas we should consider when looking at a storage solution,