VMware, Inc. is a company that provides virtualization solutions which was founded in 1998 and is headquartered in Palo Alto, California. Its virtualization platform products include Player for virtualization of desktops; Fusion for Intel-based Apple Macintosh computers; Workstation for software developers and enterprise IT professionals; Server, which enables virtual partitioning of a server; ESX Server, an enterprise-class virtualization platform that runs directly on the hardware; Virtual SMP that enables a virtual machine to use four physical processors simultaneously; and VMFS, which allows multiple ESX Servers to share block-based storage. 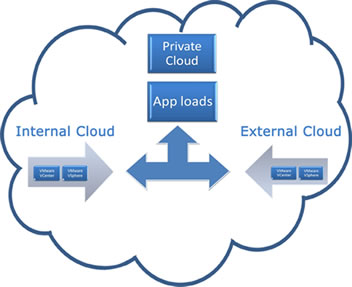 In the VMware architecture for IaaS clouds based on vSphere, the virtual machines migrations happen over the Internet. vCloud will support chunked and resumable uploads through the browser with a Java client that will also appear as a vCenter plug-in. VMware also contemplated transfer quarantine to increase security.

The vCloud APIs will be availabe for a number of tasks and will allow the provisioning of new vCenters (no more than 25 per data center):

The figure shows the structure of cloud using VMware: 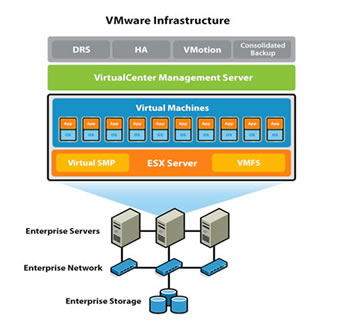 For networking, one of the most complex aspects in a IaaS cloud that supports multi-tenancy, VMware introduced the fencing technology which allows to deploy multiple, isolated VMs which can coexist despite they have identical network configurations. Fencing, which is used by every virtual lab automation (VLA) product on the market, including the VMware own Lab Manager, will be used to share the same network with multiple customers inside the same data center.

On top of that VMware supports the existence of Network Devices (NDs), which are virtual appliances offering routing, NAT and firewall capabilities.

To simplify application provisioning VMware will offer a service catalog, where end-users will be able to pick up and deploy pre-configured templates, vApps or installation media (CD/DVD ISOs and floppy images).Billing, another very complex aspects of IaaS clouds, will be managed in two ways: customers will be either charged on maximum allocation purchased (which they may or may not use during the month) for CPU, RAM and storage resources, or they will be allowed to buy pre-configured containers which are organized in sizes (small, medium, large for instance, pretty much like Amazon does for the single VMs it offers inside EC2).

vFabric is a platform to build, run and scale modern applications on-premise or in the public cloud.

Optimized for Java Spring applications, the vFabric Cloud Application Platform provides a runtime platform for your Spring applications. Whether it is developer-focused capabilities such as integration with the Springsource Tool Suite (STS), unique application visibility with Spring Insight and Spring Insight Enterprise, or the Spring GemFire project that simplifies interaction with vFabric GemFire or Spring AMQP to allow Spring developers to incorporate vFabric messaging, there are a host of capabilities that is in vFabric. VMware vFabric is available in two editions, vFabric Standard and vFabric Advanced

Designed to provide the core components for building and running custom applications on vSphere, vFabric Standard includes the capabilities that every organization requires for running their applications: from the application server optimized for vSphere, web server, data management capabilities, management optimizations for Spring-built applications and more.

vFabric Advanced extends the capabilities of Standard to address a broader range of workloads by including vFabric RabbitMQ messaging and by introducing a memory-optimized distributed SQL database with vFabric SQLFire. vFabric Advanced provides the full range of capabilities for building and running today's data-driven applications deployed on virtual infrastructure.

VMware is providing many products and services for virtualization that can be used for performance and reliability in private clouds, public clouds or hybrid clouds. VMware software provides a completely virtualized set of hardware to the guest operating system. VMware software virtualizes the hardware for a video adapter, a network adapter, and hard disk adapters. The host provides pass-through drivers for guest USB, serial, and parallel devices. In this way, VMware virtual machines become highly portable between computers, because every host looks nearly identical to the guest. In practice, we can pause operations on a virtual machine guest, move or copy that guest to another physical computer, and there resume execution exactly at the point of suspension.

Alternatively, for enterprise servers, a feature called vMotion allows the migration of operational guest virtual machines between similar but separate hardware hosts sharing the same storage. Each of these transitions is completely transparent to any users on the virtual machine at the time it is being migrated

The figures shows the infrastructure of a VMware managed environment: