Amazon was founded in 1994 and is headquartered in Seattle, Washington. It has direct international operations in the United States, Canada, France, Germany, Japan, and the United Kingdom. Since 2004, Amazon has begun to rapidly expand its web services arsenal. Products such as Amazon EC2 and Amazon S3, Amazon Route 53 have been large successes. Some of Amazon’s recent acquisitions include Shopbop (2006), Abebooks (2008), Zappos (2009), LOVEFiLM (2011). As of Q1 2011, Amazon has approximately 137 million active customers worldwide.

Amazon Web Services has been the pioneers in cloud computing. Since early 2006, Amazon Web Services (AWS) has provided companies of all sizes with an infrastructure web services platform in the cloud. AWS manages datacenters in 7 different regions of the world and allow clients to use the computing resources over the internet on a pay-per-usage model. They also provide a Management console for the users to manage their resources from the web. Apart from this AWS also provide services like loadbalancing, easy manageability in the web console. Amazon.com website itself is running on the AWS. .

EC2 is a web service from AWS that provides resizable compute capacity in the cloud. It presents a virtual computing environment; allowing us to launch instances with a variety of operating system, load them with our application and manage our access permissions. AWS datacenters are situated in 7 different regions all over the world. Amazon provides a collection of pre-configured templated images including – Linux ( centos, Redhat, ubuntu, debian, suse etc.) and Windows ( Windows Server® 2003 R2, 2008 and 2008 R2 etc) with which we can launch our instances. SparkSupport can help you migrate your current applications running on traditional servers to Amazon EC2 instances. We will calculate your resource usage need and select the correct instance type required for the smooth running of your application.

It is the storage service over the internet from AWS. It is designed to provide 99.999999999% durability and 99.99% availability of objects over a given year. Pay for only for what we use. A storage directory here is called by the name 'bucket'. The data can be stored/retrieved from anywhere anytime using an HTTPS protocol over the internet. S3 can be used as a secure off instance storage for the data. In your application if you want to store static contents S3 will be a good choice, the option is to save your static files on s3 buckets and access it via URL. Since AWS is providing different regions you can even setup a CDN like service by making it to serve your static contents from the regions near the user accessing your application.

Makes it easy to set up, operate, and scale a relational database in the cloud. This is a dedicated database instance and we will be getting only database access. RDS supports MySql and Oracle databases. Automated backups are turned on by default. MySql provides replication option also. Amazon RDS is tightly integrated with other Amazon Web Services. Low latency database access is possible for applications running on EC2. The main intention of RDS design is to reduce the manual administrative tasks for the database. 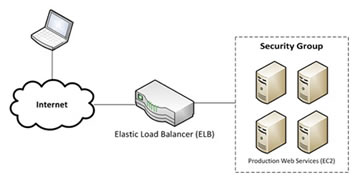